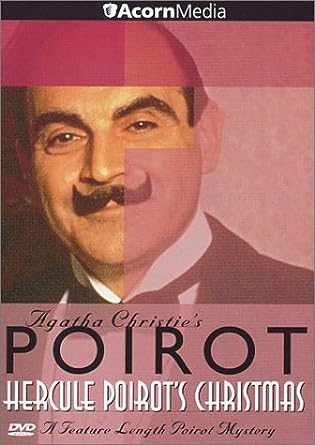 Another indelible part of my annual Christmas routine, both in print and by way of its screen adaptation starring David Suchet.  Here's my review of the latter:

It is supposed to be a quiet holiday, Hercule Poirot's Christmas, with a simple repast and a box of exquisite Belgian chocolates. And he's been looking forward to it -- unlike Scotland Yard's Chief Inspector Japp (Philip Jackson), for whom a visit to his wife's Welsh relatives is forecast. "If they start singing again ..." he groans wistfully after the pre-Christmas lunch with Poirot which he expects to be his last decent meal until the beginning of the new year.

But when Poirot is about to sit down for dinner that night, he registers a faint chill in his apartment -- first his wine is a tad too cold, then he is even compelled to put on a blazer -- and to his horror, he discovers that his radiator has gone cold. What is worse, his landlord informs him that it won't be fixed until after Christmas. And so, when he receives a phone call from cantankerous, wheelchair-bound old Simeon Lee (Vernon Bobtcheff), asking him to spend the holidays at his Shropshire estate Gorston Hall because his life may be in danger, Poirot has only one material question: "Tell to me, if you please, Monsieur Lee: Does your house have the central heating?"

Yet, even after his arrival in Shropshire, Poirot isn't quite sure what is expected of him; and unfortunately Mr. Lee, who made his fortune prospecting diamonds in South Africa, doesn't greatly elaborate -- only that he (Lee) intends to make an announcement which will give his family, who already hate and fear him, even greater cause for hatred; and that Poirot is to keep his eyes and ears open. "Bien, what am I looking for? What am I listening for?" the detective inquires. "You'll know when it happens," is Lee's terse response. But later that night, after old Simeon has informed his family that he is about to make a new will to accommodate his just-returned third son Harry (Brian Gwaspari) and his Spanish granddaughter Pilar (Sasha Behar) -- which inter alia means scrapping the allowance of Harry's brother George (Eric Carte), a Member of Parliament -- and after he has then sent them all off again, not without putting them down as "a set of mamby pamby weaklings," a loud crash and a scream reminiscent of the squeal of a slaughtered pig emanates from Simeon's room, and when the door (locked from inside) is finally broken open, they find him lying there with his throat slashed, the room in total disorder and looking like a battlefield -- and the diamonds that Simeon had recently ordered to be sent from his company's museum in Pretoria are gone from his safe.

Now, of course, Poirot's task begins in earnest; and since Wales is just across the border, he quickly resolves to save Japp from his over-exuberant, carol-loving in-laws and invite him to join the investigation. Together with Shropshire Police Superintendent Sugden (Mark Tandy) they set out to find a murderer who may equally likely have tried to prevent the alteration of old Mr. Lee's will, steal his diamonds, or have had a different motive altogether -- for as Simeon himself had boasted to both Pilar and Poirot, he had been "a very wicked man" and didn't regret it; in fact, he had "enjoyed every moment:" killing, stealing, lying, and producing a legion of sons born "on the wrong side of the blanket" in the process. As Poirot quickly discovers, almost every member of the household has not only a motive for murder but also a flimsy alibi at best: not only George who, like his young wife Magdalena (Andree Bernard) is deeply in debt, but even George and Harry's brother Alfred, who stands to inherit the lion's share of the fortune after having stayed at home and taken care of his father together with his wife Lydia (Catherine Rabett), enduring humiliation upon humiliation over the years. Then there is Pilar who, it turns out, has a few secrets of her own; Harry's reconciliation with his father is only a recent one (and who says it was honestly felt anyway?); valet Horbury (Ayub Khan Din) has yet other reasons to fear the police -- and then there is also an elderly lady (Olga Lowe) staying at a nearby inn, who likewise shows a peculiar interest in the goings-on at Gorston Hall.

While plot-wise relatively standard Christie fare -- complete with locked room, country estate, belligerent patriarch, shockingly young wives, a prodigal son returning home after a promise of "fatted calf" (to the displeasure of his demure "stay at home, stick in the mud" brother(s)), sudden testamentary changes and other motives galore -- and although Christie's imagination may have gone a bit overboard, as I am not sure the solution would have worked in reality quite the way it is described here, this adaptation of "Hercule Poirot's Christmas" is a delightful entry in the canon featuring David Suchet, as always the perfect embodiment of the little Belgian with the many "little grey cells" and perfectly waxed moustache, whom a speck of dust would cause greater pain than even a bullet, and who cannot eat his breakfast eggs unless they're exactly the same size. Faithful to Dame Agatha's novel in setting and atmosphere, like a number of other installments this episode cleverly varies the series's distinctive title melody in tune and instrumentation; in this particular instance, so as to underline its specific seasonal backdrop and Shropshire locale, which to my mind even makes it reminiscent of the title melody of the "Cadfael" adaptations, likewise set in Shropshire and originally broadcast by ITV. Fans of Poirot's sidekick Captain Hastings (Hugh Fraser) may be a bit disappointed to find him missing -- but this is still a fine Christmas gift from Dame Agatha, David Suchet and company, and as always there is plenty of banter between Poirot and Japp as well ... and an amusing little subplot involving their mutual Christmas presents.

"Ah, Chief Inspector, you have been thinking again -- I have warned you of this before ..." (Poirot to Japp, after listening to his theory on the murder.)