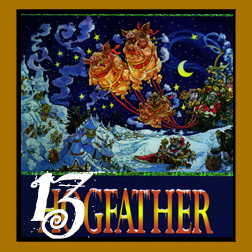 Tasks for Christmas: Post a picture of your stockings hung from the chimney with care, –OR– a picture of Santa’s ‘treat’ waiting for him. –OR– Share with us your family Christmas traditions involving gift-giving, or Santa’s visit. Did you write letters to Santa as a kid (and if so, did he write back, as J.R.R. Tolkien did “as Santa Claus” to his kids)? If so, what did you wish for? A teddy bear or a doll? Other toys – or practical things? And did Santa always bring what you asked for?

I'm afraid I was disabused of the notion that there actually was a Santa Claus even before my mom "officially" did so when one year -- I think I may have been four at the time -- I found something she hadn't yet gotten around to hiding really well that later showed up wrapped up under the Christmas tree.  (Of course I didn't let on I had found it before, or at least I did my best not to.)  Also, I think it was even in kindergarten that I first learned about the historic St. Nicholas, bishop of Myra, and where we were told that the "Christ child" (Christkind) who in Germany is said to bring all the presents in addition to / or in competition with Santa Claus is to be understood symbolically, with the gifts we receive "from him" as a tangible manifestation of the good brought into the world by the little boy in the manger some 2000 years ago.

So I didn't write letters to Santa, but my mom had me write out a wish list nevertheless, and yes, some of the things from the list would usually be part of what I received.

Germans exchange gifts on Christmas Eve, not the morning of Christmas Day, and I think our family tradition is the same, or at least very similar to that of many other German families (with the only significant differences being whether you go to church or not -- and if you do, whether it's in the afternoon / early evening or at midnight -- and whether you exchange gifts before or after dinner).  We go to church early in the evening, usually at 6:00 PM -- while I was growing up and in the years until I moved away after I'd graduated from university, the church where I was confirmed, which was the closest Protestant church to where my grandparents lived (and where we used to live when I was a kid) 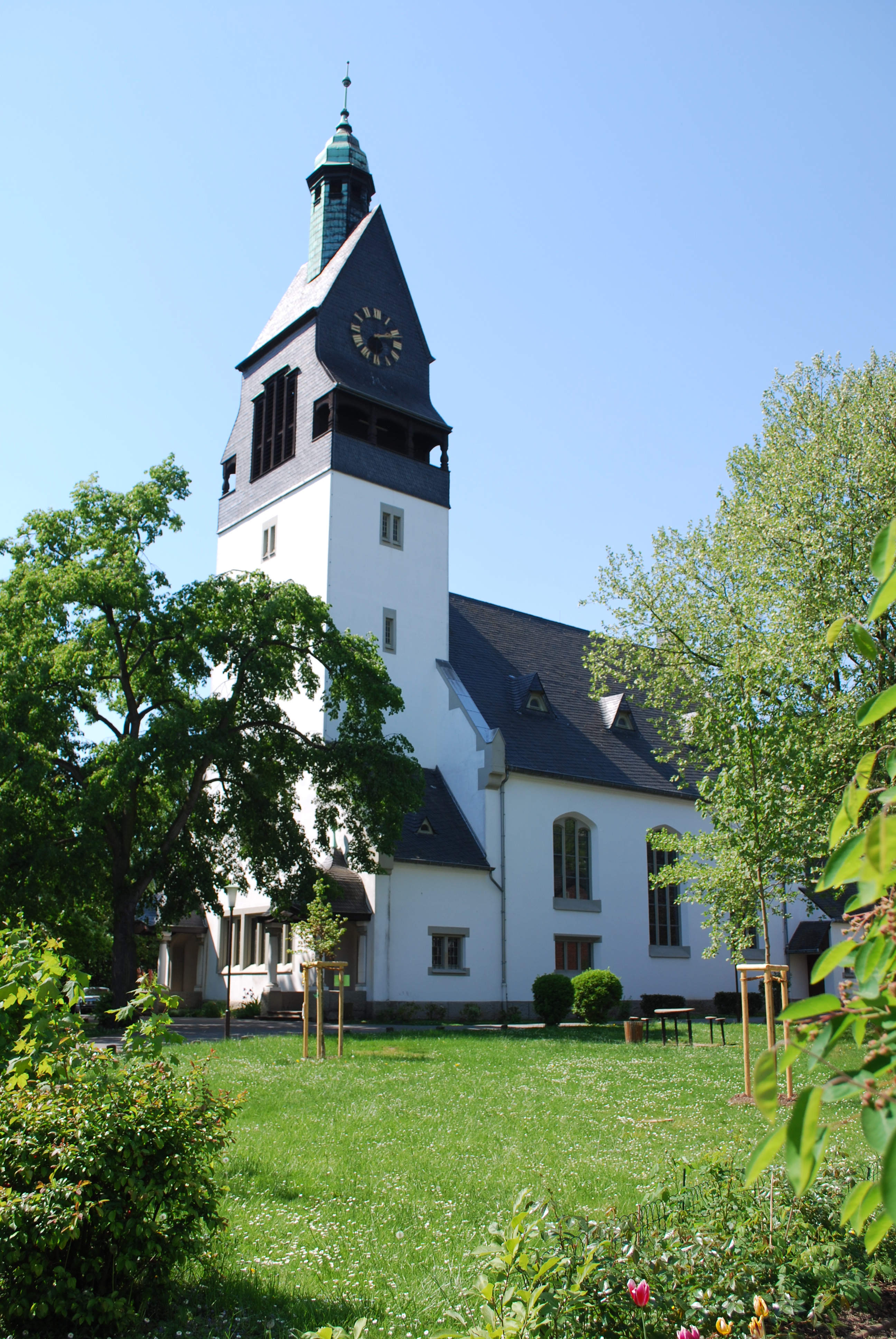 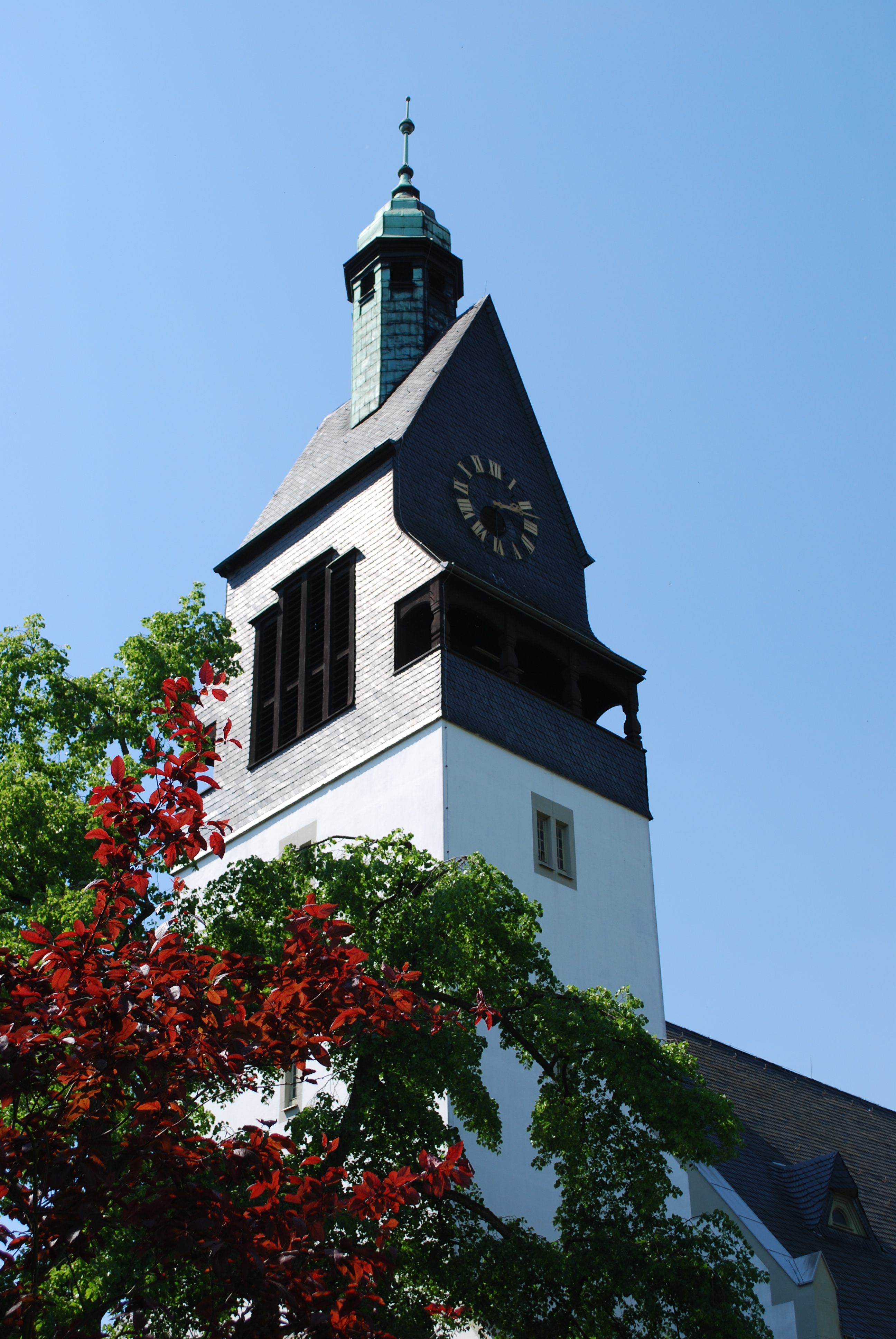 -- whereas these days, we go to the Protestant church closest to where we now live, which is a 15-20 minute walk from our home.

In the years up until my graduation from university, our gathering on Christmas Eve consisted of either just my maternal grandparents, my mom and me, or in addition there would be the family of my mom's sister, with whom we were particularly close, and who lived near Bonn for a few years while I was in elementary school, and then again after my uncle had retired.  "The kids" (actually, all the family except for either my mom or my aunt, depending in whose home we were celebrating) would be banned from the living room until all the lights on the Christmas tree were lit, then a little bell would call us in, and we'd exchange presents, and after that, we'd have dinner. 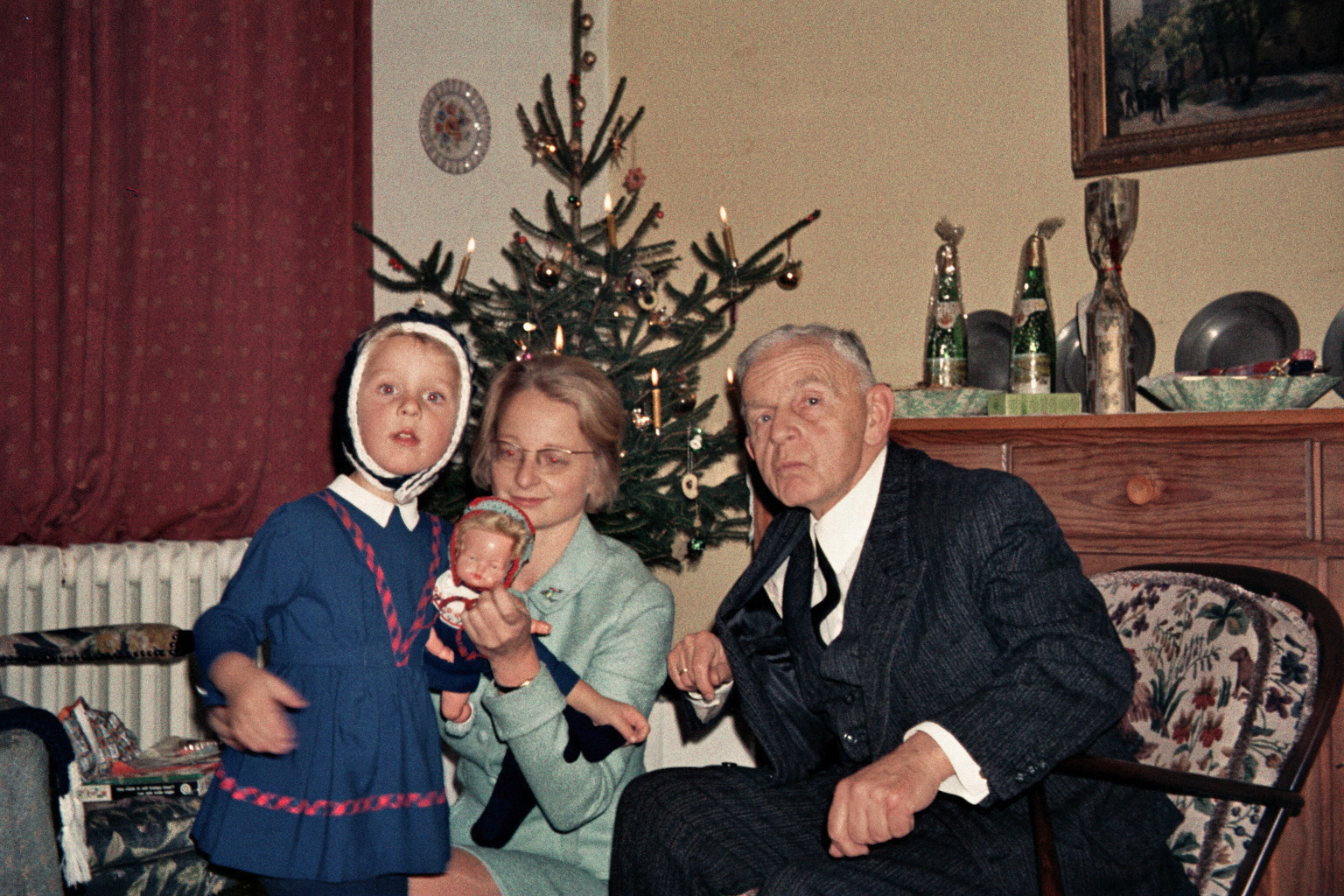 ca. age 4, with my mom and my grandpa (I think I've shared this one before) 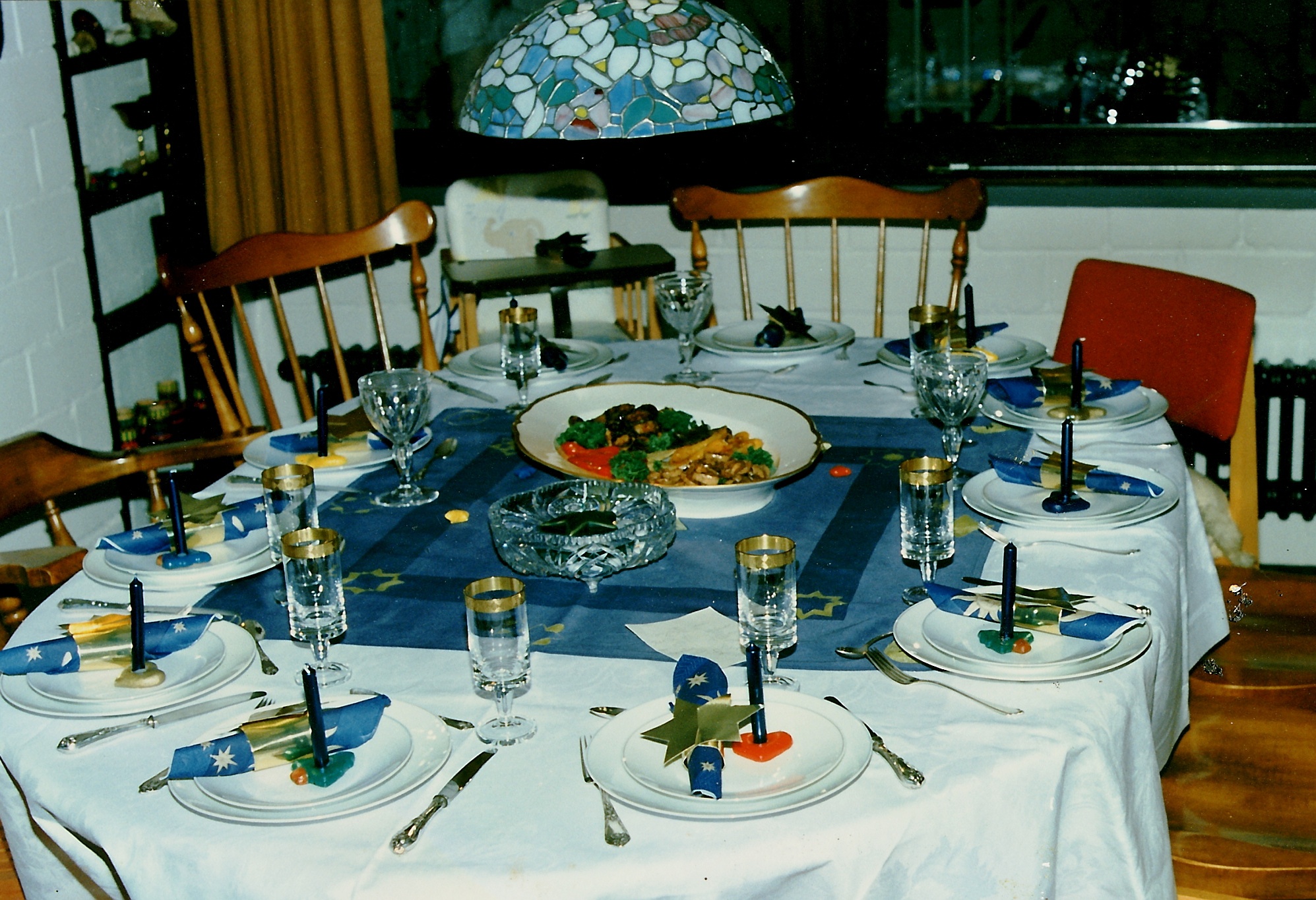 These days, it's just my mom and me on Christmas Eve (though we may get together with other parts of the family on Christmas Day or on Boxing Day), and we still follow essentially the same routine.

Santa Claus / Saint Nick actually comes twice in Germany, once in his incarnation as St. Nicholas, on the evening of that saint's official holiday (December 6), and then in his incarnation as Father Christmas / Santa on Christmas Eve.  While his Christmas visit is said to be a secret one, his visit on St. Nicholas"s Day is one equally dreaded and anticipated by children, because it's then that they get to account for their misdeeds throughout the year ... or get presents -- nothing major, mostly chocolates, cookies, tangerines, nuts and the like -- for being able to prove they've been good kids.  Of course they always end up being loaded with sweets, but if "St. Nick" is sufficiently convincing -- or is actually accompanied by his scary servant, Knecht Ruprecht, whose job it is to administer the punishment to bad children --, there's a moment of a certain frisson at the beginning, with St. Nick, typically a member of the family and thus excellently informed, going through their "record of behavior" for the year.  I have only vague memories of this (and no photos at all) from my own childhood, both at home and at my kindergarten, but here's my uncle dressed up as St. Nicholas for my cousin's kids: 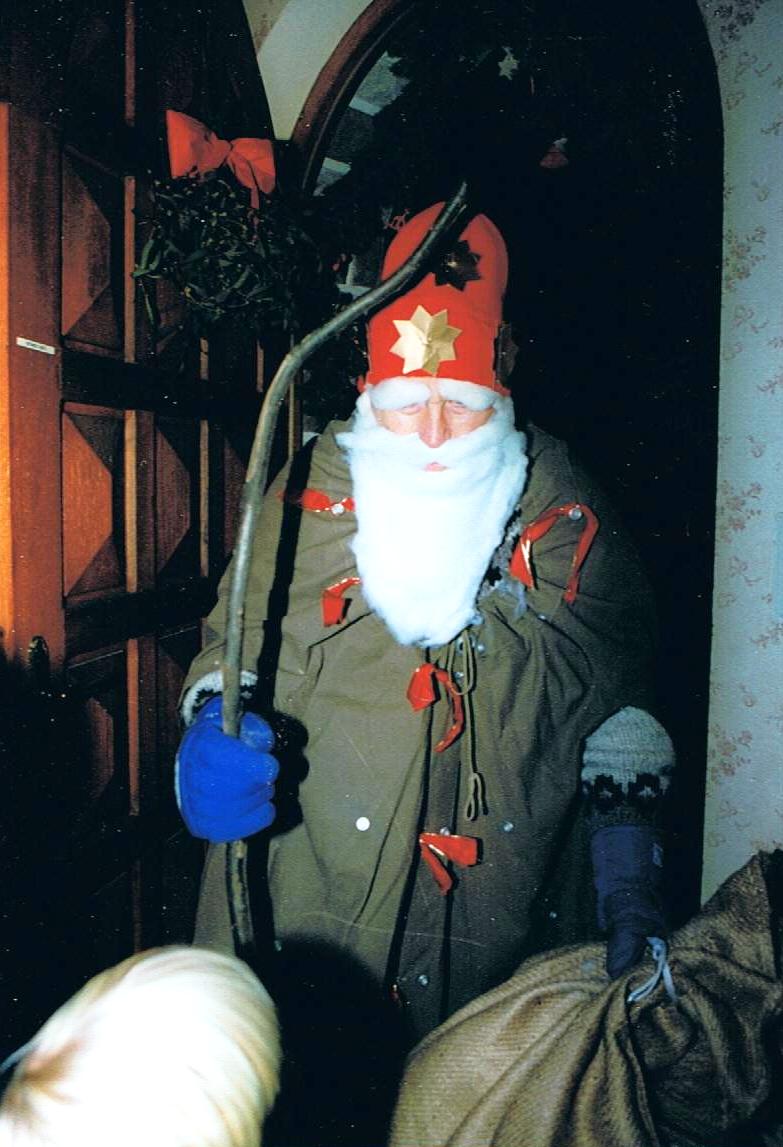 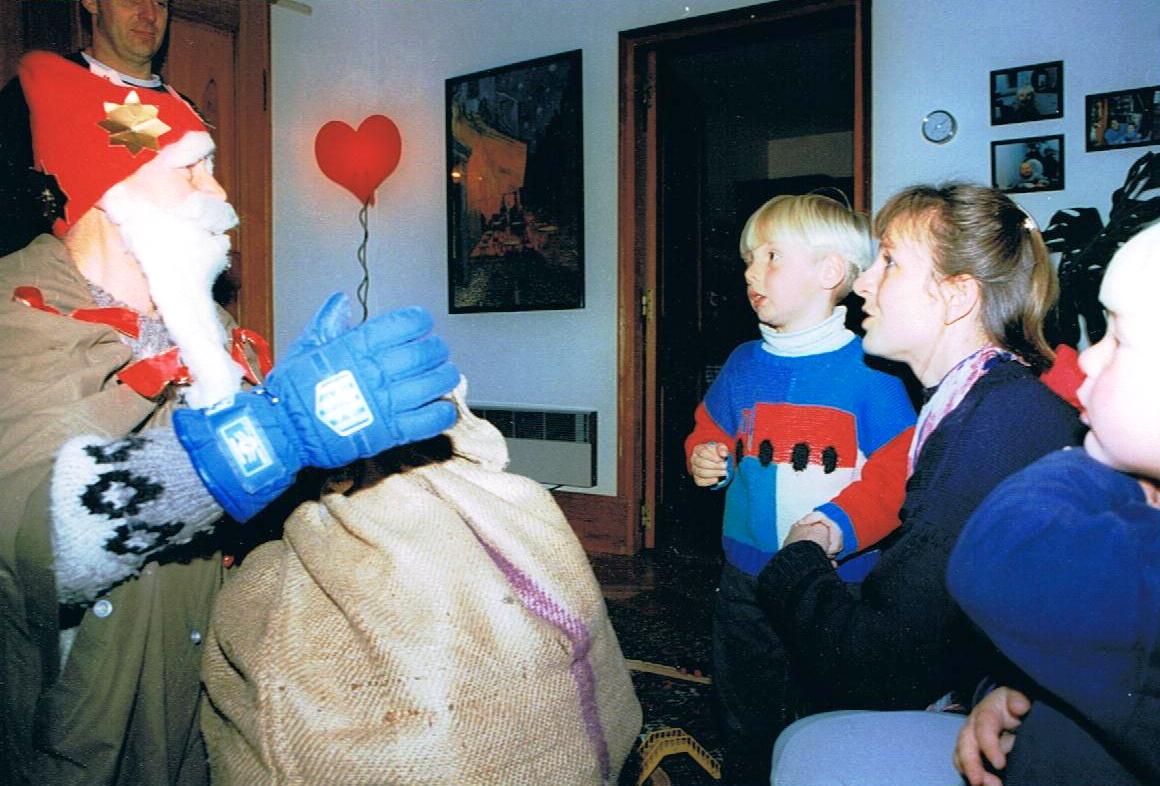