A Note on Kill Your Darlings game play!

I'm working on the game right now, and will be posting more over the next few days. However, I can see a bit of confusion already developing!

Players won't be "playing" as suspects or victims. I don't want to deter anyone from using their imagination, so feel free to adopt a persona for your game play, but the general way that the game will work is that the participants need to identify the suspect, the victim, the crime scene and the cause of death by posting guesses, and then they will need to "collect" the appropriate card. I will be responding to the guesses with a "right" or a "wrong."

So, for example, the solution to the crime might be: 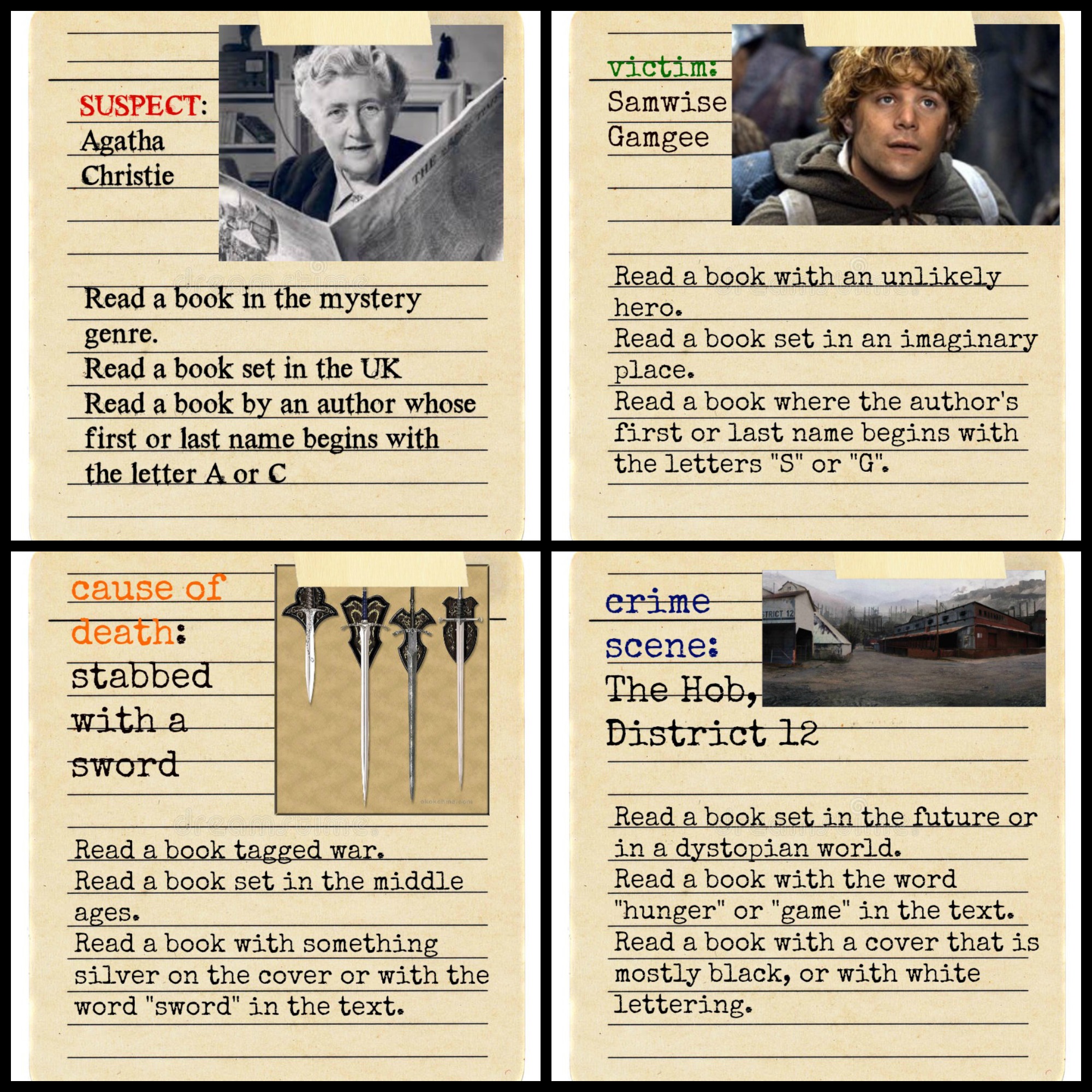 Now player 2 reads a book that fits the Agatha Christie card, player 2 can post "Agatha Christie" as their guess. That guess is right. The suspect identification part of the game has been completed.

So, If I respond with a "wrong," everyone will know that they can cross out that possibility.

If I respond with a "right," then you can cross out all of the other possibilities.

If another team identifies the suspect, your team still needs to "collect" the card by completing one of the tasks on the card. Only ONE team member needs to do this. The remaining team members can continue to read for the other crime elements.

Until someone identifies the suspect, he/she can continue his/her crime spree by adding victims/crime scenes/causes of death to the game play. This will be done at random by me, because I am the mastermind! ;)

And remember, the suspect authors are WILD CARDS. You can read any of their novels and use them for any guess. If you want to use a Sherlock Holmes short story, you need to read enough stories to get to novel length (240 pages/60K words).

WAYS TO PLAY THE GAME:

We are going to start with everyone playing the same game. You can team up with other players and get the benefit of their reading, or you can play alone. Everyone will know what the other investigators have discovered, but if you are playing alone, you still have to complete the card before you can "collect" the element. If you are playing as a team, you can strategize however you want! And I encourage strategizing!

The game ends when a player or a team has collected all of the cards that are in play. Once someone collects all of the cards, that game ends. Depending on how long each game takes, we may do another round or two.

The suspects will NOT kill their own character. So, if the suspect is J.R.R. Tolkien, you can knock Samwise Gamgee off of your victim list. The authors are killing other writer's beloved characters. They do, however, have no compunction about using their own settings/weaponry.

Feel free to ask questions below!