In my quest for Christie-related reading material, I've decided to work yet another series of reads into this year's program; namely, Dame Agatha's plays -- NOT The Mousetrap, Witness for the Prosecution and other blockbusters, however, but her lesser-known and forgotten ones; both stand-alones and adaptations of her own novels.  Most of the latter are collected, together with her aforementioned blockbuster successes, in The Mousetrap and Other Plays; the others are published individually by Samuel French.

The Mousetrap and Other Plays includes:

* Go Back for Murder,

as well as a stand-alone play named Verdict.

(Go Back for Murder is the dramatization of Five Little Pigs, aka Murder in Retrospect).

Three of Dame Agatha's other plays were novelized by Charles Osborne: I've seen enough of those novels NOT to ever want to go near any of them ... but I am very much interested in Christie's original works:

* The Unexpected Guest and

Then, there is a collection of three one-act plays collectively published under the title Rule of Three:

* Afternoon at the Seaside

as well as two plays set in Egypt: the dramatization of Death on the Nile and one of her final works, a history play set in Ancient Egypt published in 1973 but never produced in her remaining lifetime,

* Murder on the Nile and

Finally, there is a set of radio dramas rereleased by the BBC a few years ago:

* Butter in a Lordly Dish

* Murder in the Mews and

I'm not planning to binge on these, but I'll be sprinkling them into my reading over the course of the year.  If anybody would like to join, please let me know -- I'm always up for a buddy read. 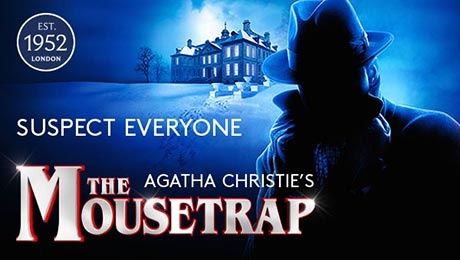