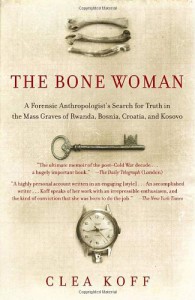 Second section, Kigali. This part begins with a detail I'd have liked to see mentioned right at the beginning of the book itself: The so-called "Tutsi" and "Hutu" "ethnicity" is anything but that -- in fact, it's not an indigenous African thing at all, but an artificial classification introduced by Rwanda's European colonial overlords, Germany and Belgium, in the early decades of the 20th century, based on physical features and social criteria (chiefly occupation: rural / agricultural vs. town-dwelling / merchant, as well as family wealth or absence thereof)  -- and as a result of intermarriage and changing social structures, by the time of the 1994 genocide it had long outgrown any dubious validity it might ever have had in the past.

Koff is "welcomed" to Kigali by a brutal reminder of the genocide by having to spend her first two nights in a hotel room riddled with bullet holes, in one of the hotels where hunted-down groups of Tutsi had tried in vain to find refuge.  That said, in this section there's less detail on the victims' stories, as told by their exhumed remains here -- and if the Kibuye section had been like this as well, I'd be complaining about superficial contents in this particular regard, too.  Still, there is this:

"Meanwhile, the skeletons were telling their stories, and they were different stories from those that came oout of the Kibuye church mass grave.  The second skeleton I analyzed, that of an adult male, exhibited all manner of trauma: a fractured mandible, a fractured clavicle, a fractured sternum, bilateral rib fractures, both humerii fractured, and a fractured right foot.  That is, this person was beaten to death and had tried to defend himself in the process.  In contrast, the trauma on the Kibuye bodies had made it hard to picture the violence in the church: how was it that so few people had raised their arms to protect their heads as their assailants approached with upraised blunt and sharp instruments?  The absence of defense wounds gave my image of that massacre an eerie calmness: did people take the blows as though taking the sacrament?  Or had so many people been packed into the church that they couldn't even raise their arms to protect themselves?  But here in Kigali, this skeleton was telling the story of a person struck on the chin, defending himself from blows to the body and the chest and, probably, blows even after he fell to the ground.  Buried next to him were another man, beaten, and yet another, shot."

Koff also visits a village named Ntamara where, like in Kibuye, the victims had been herded into the church to be slaughtered there, and where the inside of the church had been made into the gruesomest memorial imaginable, with everything just being left exactly as it had been right after the massacre -- with now decomposing corpses lying higgledy-piggledy above, below and next to each other, all across the pews and the ground, and literally rotting right into the church floor, a spectacle filling basically the entire interior of the church -- and she wonders whether something very much like this might have been what first confronted the survivors in Kibuye as well, before they decided to bury their dead in the mass grave later exhumed by the experts.  And about yet another visit to the site of a massacre, she relates:

"One of our destinations was a mine that reportedly held remains.  Dean rappelled down the shaft to investigate, while several women came to lie on the grass and watch us.  One of them had a terrible swelling in her leg, encompassing the top of her foot and traveling up her shin and calf.  She explained to Pierre [note: an ICTR investigator traveling with the experts, in part to take witness statements] that during the genocide, her husband had paived five thousand Amafaranga (Rwandan francs) to her would-be killers to save her from being thrown alive into the mine.  The aggressors took her husband's money but cut her Achilles tendon before they left.  The ankle had been trying to heal itself for almost two years.  She sat on the grass while she talked quietly, and I thought about Kibuye, just as I had at Ntamara.  Here we were, on the other side of the country from the church whose grounds yielded skeletons with deep cut marks on the backs of their ankles, talking to a woman who survived the same kind of assault because her attackers were open to negotiation.  I imagined thousands of such women -- and men, and children -- across Rwanda, walking with canes or crutches, their skeletonized counterparts half buried in the ubiquitous verdant undergrowth."

The Kigali team is not as homogeneous in purpose and approach as the one in Kibuye, and consequently it fractures under stress -- as is invariably bound to happen in high-stress working conditions like these.  On the other hand, Koff highlights that Kigali was the only site where she experienced a sense of closure at the end, as for once she was able to go through a proper hand-over procedure with the people staying / coming in when she left.

As far as the prosecution side is concerned, the person held criminally responsible for the killings near Amgar garage in Kigali, near which were found the bodies which the Physicians for Human Rights expert team exhumed and examined, was Georges Rutaganda: a prominent businessman and menber of the National and Prefectoral Committees of the political party of President Habyarimana ("Mouvement républicain national pour la démocratie et le développement", MRND) -- the key driving force behind the genocide -- as well as second vice president of the National Committee of the MRND's youth militia, the Interahamwe.

In that latter capacity, Rutaganda had members of the Interahamwe set up a roadblock near Amgar garage, where Tutsi trying to pass were singled out and taken to the garage and killed there.  Other groups of Tutsi were rounded up elsewhere in Kigali and nearby locations and then either likewise taken to the Kigali garage and killed there, or killed on the spot and their corpses were taken to the garage. -- Moreover, Rutaganda was one of the chief propagandists of the genocide, using a radio station that he owned.

Georges Rutaganda was sentenced to life imprisonment in December 1999; a sentence affirmed on appeal on May 26, 2003. He died in 2010, while serving his sentence in a Benin prison.

Interestingly, although Drs. Haglund and Peerwani again testified at the trial as to their findings, the ICTR Trial Chamber here did not see itself in a position to establish, with the requisite amount of certainty, a link between the killings described by the witnesses testfying at his trial and the bodies exhumed and examined by the experts team.  I.e., while there was / is no doubt that these people died a violent death, the trial chamber did not find that these were the very victims of the killings which Rutaganda stood accused of having ordered and incited.  Rather, the trial chamber rested his conviction and sentence for genocide and "murder as a crime against humanity" solely on the testimony of the eye witnesses to the events. -- The prosecution did not appeal the trial judgment on factual grounds, i.e., with regard to the rejection of Drs. Haglund and Peerwani's expert testimony (as it could have done: the prosecution's right to appeal on factual, legal and / or sentencing grounds is a feature that ICTR, ICTY and (I think) International Criminal Court proceedings share with the majority of civil law jurisdictions); they probably concluded that they had secured the maximum sentence, life in prison, either way (and once you reopen factual issues on appeal, you never know whether the whole thing isn't going to come crumbling all around you after all, even if -- like in these proceedings -- appeal doesn't involve a complete review and reassessment from scratch).  That said, the Appeals Chamber -- in a majority ruling -- did reverse the trial judgment on the one ground of appeal raised by the prosecution; namely, the characterization of certain of the murders as war crimes, and it also unanimously affirmed the life sentence (see above) and rejected the bulk of Rutaganda's grounds for appeal.

In fact, Koff, in her book, alludes to the experts' own sense of uncertainty as to the provenance of the victims they had examined: Not only had they failed to identify all but one victim among the several bodies they had worked on; initially, there had also been a certain amount of misdirection as to where "their" bodies were to be found in the first place -- indicating that there was no reliable information as to what exactly had happened to the corpses of the people killed at the garage.

Aside from the lack of a sufficient link between the findings of the forensic experts and the crimes specifically before the court, as found by the trials chamber, the appeals judgment in this matter is notable as well, in yet another regard: Rutaganda had appealed his conviction, inter alia, on grounds of witness tampering resulting from too close contact between certain expert witnesses (though not Drs. Haglund and Peerwani) and their team members with several of the "fact witnesses" (eye witnesses) testifying before the Tribunal.  Ultimately, that ground for appeal was rejected, but the Appeals Chamber had to perform quite a close analysis of the evidence to get to that result -- and the judgment highlights just how crucial it is for experts (not merely those who will end up actually testifying at trial, but every single member of their team) to be extremely careful when interacting with anybody who might just possibly end up being a witness at trial.  (And to be clear, such interactions may be inevitable to a certain extent, particularly in situations like these where the survivors are literally the only people who can provide the factual information which not only the prosecutors and the court, but also the experts require to be able to do their job properly.)