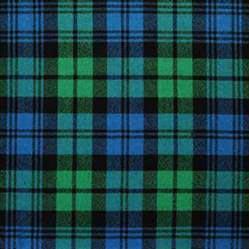 My favorite tartan already exists -- it's the famous Black Watch, the colors of the 3rd (infantry) Battalion, Royal Regiment of Scotland.

The battalion was created when in April of 1725, on the advice of General Wade, Commander-in-Chief in North Britain, King George I authorised the raising of a "Watch" comprised of six Independent Companies, to be "employed in disarming the Highlanders, preventing depredations, bringing criminals to justice, and hindering rebels and attainted persons from inhabiting that part of the kingdom."  Wade's May 15, 1725 order regarding the uniform of the companies mandated

"to take Care to provide Plaid Cloathing and Bonnets in the Highland Dress for the Non-Commission Officers and Soldiers belonging to their Companies, the Plaid of each Company to be as near as they can of the same sort and Colour."

It's unclear to this day why the Watch was called "Black".  Some think it's simply because of the very dark appearance of their uniform tartan; others believe that the Watch was used in combating the protection rackets known as "black mail". Yet others suggest that, as agents of an unpopular government, soldiers of the Watch were considered to be black as in the sense of "black hearted"; however, since the officers of the companies seem to have used the term themselves, this sounds somewhat unlikely.  Another theory is that the designation came from the black cockade of the House of Hanover (as opposed to the white cockade of the Jacobites).

Based on anecdotal information from men who were with the regiment in 1739, a new tartan seems to have been introduced at that time. It is possible that it was then that the characteristic arrangement of the thin black lines was added to the existing green/blue/black of the tartan.  Portraits which depict the Government Tartan in precise detail exist from the 1760s.

The regiment's motto, Nemo me impune lacessit ("No one provokes me with impunity", or put less politically correct, "Don't f*ck with me") is also the motto of the Royal Stuart dynasty of Scotland

Although red is my favorite color, I wear red in clothing almost exclusively as sweaters or tops these days (or accessories); and as clothing, I don't particularly like predominantly bright red tartans such as, say, Bruce, Wallace, Stewart Royal, or most of the MacDonald tartans.

If I've bought reddish tartan accessories in the recent past, they were either pink or very dark red / purple, along the lines of

(Task: If you could create your personal tartan, what would it look like?  Or if you have a favorite existing tartan, which one is it?)