Busman's Honeymoon: A Lethal Play, or, Sayers's Last Word on Peter and Harriet “PETER (frowns): You know, Harriet, this is one of those exasperatingly simple cases. I mean, it’s not like those ones where the great financier is stabbed in the library –

HARRIET: I know! And thousands of people stampede in and out of the French window all night, armed with motives and sharp instruments –

PETER: And the corpse turns out to be his own twin bother returned from the Fiji Islands and disguised as himself. That sort of thing is comparatively easy. But here’s a dead man in a locked house and a perfectly plain suspect, with means, motive, and opportunity, and all the evidence pat – with the trifling exception of the proof.”

Lord Peter Wimsey’s final full-length murder investigation first saw the light of day as a play – like the subsequent novel, titled Busman’s Honeymoon – co-written with Dorothy L. Sayers’s friend from her Somerville College, Muriel St. Clare Byrne. Although it enjoyed a successful run after its November 1936 Birmingham and December London 1936 premieres, the play’s success was transferred entirely onto the novel of the same name published the following year, and the playscript was never reprinted after its initial 1937 Gollancz first edition. It took another half century, the acquisition of the original manuscript and a wealth of associated papers by the Marion E. Wade Collection at Kent State University’s Wheaton College, and the express (and narrowly limited) consent by Sayers’s son Anthony Fleming for the play to be republished, along with the drawing room comedy Love All (in manuscript, alternatively titled Cat’s Cradle), which Sayers wrote together with another Somerville College friend, Marjorie Barber.

In the novel Busman’s Honeymoon, Sayers elaborates on the plot and the themes addressed in the play, but she remains faithful to the stage version in every respect, entire lines of dialogue are taken from there, and the play of course distills down the basic structure of the action, merging the demands of dramatic sequencing and those of a detective story scrupulously based on the fair play rule according to which, in the authors’ words, “every clue must be shown at the same time to the public and to the detective”. The detective is not to have any secret knowledge or other advantage over the audience (nor vice versa), and comparing their play’s structure to that of “a Three-part Fugue, moving contrapuntually to an ordered resolution”, the playwrights continue to explain in the authors’ note:

“It was necessary to invent a technique to express this formula, since the novelist’s approach by argument and explanation is clearly unsuited to the stage. For the First Act, in which most of the major clues are introduced, the method chosen is that of visual presentation. The clues as to Means are displayed, silently but conspicuously, down-stage, while at the same time the animated discussion of trivialities up-stage holds the ear and divides the attention of the audience. The producer’s task is thus to play, as it were, two independent tunes concurrently, concentrating upon inessentials in order to disguise, without concealing, the essentials of the plot-structure.

In the Second Act, the method, while still contrapuntal, is slightly varied. While the inquiry is ostensibly directed to Motive, the information actually conveyed to the audience chiefly concerns Opportunity, or the lack of it. Here, Superintendent Kirk’s unwavering canto fermo is contrasted with the freely moving descant played by Peter, who hovers continually above the action, sometimes in concord and sometimes in passing discord with the set theme. The producer may note the visual symbolism, whereby Kirk remains throughout firmly planted in his chair, while Peter wanders about the stage, darting in upon the problem from all angles.

In Act III, Scene 1, which for the purposes of the plot establishes Motive, the attention is held by yet another theme. This, introduced in the First Act and kept moving by occasional passages in Act II, here emerges into prominence. The human and emotional aspects of the situation, as it affects the private lives of the characters concerned, become the main source of interest. An effort is here made to do for the detective play what has already been achieved for the detective novel – that is, to combine it with the comedy of manners, and so bring it back into the main line of English dramatic tradition. In this scene, the masks are dropped all round: [along farcical-comedy and tragi-comedy lines by others and] along romantic-comedy lines by Peter and Harriet, the complete sincerity of whose emotion is the touchstone by which all the rest of the action must be tested.

In the final scene, both the disguised and the ostensible clues extracted from the previous scenes are presented and a fresh in a visual reconstruction to solve the problem on purely theatrical lines; and at the same time the emotional elements are brought into harmony.”

In a lengthy introduction, the book’s editor, Alzina Stone Dale, elaborates on the genesis and various birthing stages of the play, and the book’s no less than four appendices reproduce significant additional materials; including the authors’ stern warning to producers as to the truly lethal risks of the murder method employed here, coupled with several-pages-long minute instructions how Peter’s reconstruction of the crime at the end of the play should be faked, so as to avoid actually endangering anyone on stage (first and foremost the actor playing the murderer, who ends up caught in and unmasked by his own trap in the reconstruction).

Another appendix reproduces Sayers’s handwritten notes on the major characters:

“PETER will be 45 next birthday; & though his small bones, whippy figure & fair colouring give him a deceptive appearance of youth, his face, in its rare moments of repose is beginning to show the marks set there by time & experience. At first sight one would say that the lines of brow & chin ran back rather alarmingly; but this, too, is largely an illusion, due to the dominance of the high, beaked nose which is, one feels, a tradition handed down from the Norman Conquest or thereabouts & somewhat exaggerated in the transmission. The steadiness of the grey eyes & long, humorous mouth is reassuring, & there is certainly no lack of physical health or vitality; yet the acuteness of the facial angle, the silvery pallor of hair & skin, the slight droop of the eyelids, the sensitive and restless hands, & above all a certain nervous tautness of gesture & carriage – these signs perhaps convey a warning that the family blood will not stand very much more this kind of thing, & that in marrying a commoner he has shown no more than a proper consideration for posterity. His social poise is inborn; but his emotional balance appears to be rather a matter of discipline applied partly from within & partly by training and circumstance; his outbursts of inconsequent gaiety are the compensation for the exercise of a rigid control in other directions. A natural sweetness of disposition, allied to a freakish sense of humour & assisted by a highly-civilized upbringing, makes him easy enough to get on with, but to get within his guard is difficult. The light, high, over-bred voice is his own; but the drawl, like the monocle, is part of the comedian’s make-up which he can & does put off when he is in earnest. […] Nor does he hold any surprises for Bunter, who has known him from his teeth to his toe-nails for twenty years. How far Bunter has it in him to surprise Peter is a matter for infinite conjecture.

HARRIET is 30 years old, tall, strongly-made & vigorous in speech, movement & colouring. She has dark hair & eyes & a skin like honey; her face has more character than beauty, but the older she grows the handsomer she will become. […] Past unhappiness has matured but not tamed her; she has not learnt, & never will learn, self-discipline as Peter has learnt it. What she has got & what he loves her for, is an immense intellectual sincerity. She will commit endless errors of judgment & hold to them in the face of any emotional attack; but if her reason can be persuaded, she will admit the error freely & without rancor. It is evident that she will never be happy unless her passions & her reason can march side by side; & she is lucky to have found a man honest and unselfish enough to refrain from using her heart as a weapon against her conscience. Indeed, in this respect he is the more vulnerable, & it is her honesty that will prevent him from turning the same weapon against himself. The fact that they both have the same educational background is probably a considerable factor in the establishment of a common understanding; & though you might think that they are the last people who should ever have married one another, Oxford will in the end be justified of her children.” The 1980s' version of Harriet and Peter: Harriet Walter and Edward Petherbridge -- in the small screen adaptation of Gaudy Night

HARRIET: Oh, my dear: What is happening to us? What has become of our peace?

PETER: Broken! That’s what violence does. Once it starts, it catches us all – sooner or later.

HARRIET: Is there no escape?

PETER: Only by running away … (Pause) … Perhaps it might be better for us to run. If I finish this job, someone is going to hang. I have no right to drag you into this mess … Oh, my dear, don’t upset yourself so. (He goes up to her.) If you say the word, we will go right away. We’ll leave the whole damnable business ... and never meddle again.

HARRIET: Do you really mean that?

PETER: Of course I mean it. I have said so. (His tone is that of a beaten man. He crosses and sits on arm of chair by table L.)

HARRIET: Peter, you are mad. Never dare to suggest such a thing. Whatever marriage is, it isn’t that.

HARRIET: Letting your affection corrupt your judgment. What kind of life could we have if I knew that you had become less than yourself by marrying me?

PETER: My dear girl, most women would consider it a triumph.

HARRIET: I know. (Gets up and comes down-stage.) I’ve heard them. ‘My husband would do anything for me.’ … It’s degrading. No human being ought to have such power over another.

HARRIET (decidedly): Then we won’t use it. If we disagree, we’ll fight it out like gentlemen. But we won’t stand for matrimonial blackmail.”

I just love that dialogue (which is contained both in the play and in the novel). It’s what epitomizes Peter and Harriet to me – and it just might explain, too, why Sayers didn’t finish a single further novel featuring them but, rather, only gave us glimpses at their married life in a couple of short stories. Because really, what else is there left to be said after this? 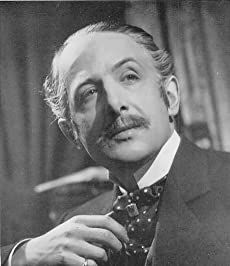 Dennis Arundell and Veronica Turleigh, who played Peter and Harriet in the 1936-1937 theatrical run of Busman’s Honeymoon (images from IMDb)