BookLikes (and Legimi), is this really all you've got?

"The site is live and running again. No other features are planned in the nearest future. The performance will be looked into depending on the problems and the availability of resources. Sorry for any inconvenience."

Not any more.  Not by a long shot.

It's not about "new" features.  It's about fixing problems that have existed for years -- in fact, ever since Legimi acquired BookLikes four years ago --, that have grown progressively worse over the course of time, and that have been brought to the attention of BL management time and again, always (as we all know) to no avail whatsoever.

A serious commitment to fix those problems would require immediate action: no ifs or buts.  Not "depending on the problems and the availability of resources."  Not just "looking into" the performance of the site.

Not just a canned response that couldn't possibly say "we really don't care" any clearer if it had shouted as much in neon letters a foot high or higher.

After last night's statement on behalf of BookLikes, I won't create any content here anymore.  In fact, if that statement had been posted about 45 minutes or an hour earlier, I wouldn't even have created the new post(s) I did still create last night.  I will instead continue to do what I already started doing when BL crashed for several days back in January of this year; namely, back up and salvage all that content of my BL account that isn't already backed up elsewhere anyway (such as, fortunately, most of my blog posts, my library and most of my book-related data).

To those who want to stay in touch, as of now you can chiefly find me here:

Wordpress: This is where I will continue posting my reviews and other blog posts.  In the past, my WP blog has been primarily -- though not exclusively -- my back up site for BookLikes posts, so it will take some tender love and care to be made truly presentable, but some projects are already under way; and other than salvaging my BL content, that will be my focus over the rest of the summer.

Librarything: Far and away the best online library system; you can really tell that the site was created by people who are librarians (and techies) first and foremost.  LT's book database -- and librarian / editing features -- were superior to those of BookLikes by a magnitude of several galaxies even at the best of times: I've been willing to put up with the standard that BL had to offer for the sake of its blogging features and, most importantly of course, the BL community, but ... no longer so.  There is no question that LT's social / communication features are unwieldy and in need of a serious overhaul.  And no, I am not entirely comfortable with the fact that Amazon holds an indirect minority ownership interest in LT, which it very likely could increase to direct / sole or majority ownership at any time if it so chose.  But at least LT (unlike BookLikes) lets you export your book data -- and I am not planning to post any reviews there --, so if it ever comes to that point, it will be easy enough to pull out.  And its social features are "learnable" and, like everything else, get easier to manage with increased use.

Goodreads: I left GR behind as my main book site back in 2013 and have no intention of reversing that decision.  However, I understand that not all of my friends from the BookLikes community feel comfortable creating a blog elsewhere or navigating Librarything, and at this point many have already made the move to the Outpost and / or (Mostly) Dead Writers Society groups on GR.  So to the extent that discussions and community activities are hosted there, I'll participate.

Twitter: This is not an account I use to actively participate in any discussions, at least not outside the rare book-related convo or other; but I can be reached by PM there if necessary.  If you do have a blog or a Librarything or a Goodreads account, though, those are the paths of communication that I prefer.

There are two buddy reads to which I had been looking forward here on BookLikes in the near future.

For Hannah Arendt's The Origin of Totalitarianism, BT has already created a thread in the Outpost group. (@ Mark, I hope you've found us there!)  As she said in her first post, please join us -- everybody is welcome!

As for the planned second French buddy read (and possible "buddy watch" of the TV adaptation of the Nicholas Le Floch novels), @ Tannat and @ Onnurtilraun, please let me know your preferred venue!  You can comment on this post -- I'll still be around for a while, so there is every chance I'll see it -- or reach me on any of the above-mentioned sites.  (Tannat, I know you're on GR, LT and WP ... not sure about Onnurtilraun, though?)

Like so many others who have posted something similar in the past couple of days and weeks, it breaks my heart to be making this decision.  The BookLikes community is, without question or comparison, far and away the best book community I've ever belonged to.  The basic setup of BookLikes -- a blogging community with an integrated book database -- is, as such, unique in the online world.  But while I've always said that I'll be here until the end, I feel the end has now indeed come -- not because the community has given up on the site, but because its owners and administrators have.  Their statement on Facebook couldn't possibly make that any clearer.  So: 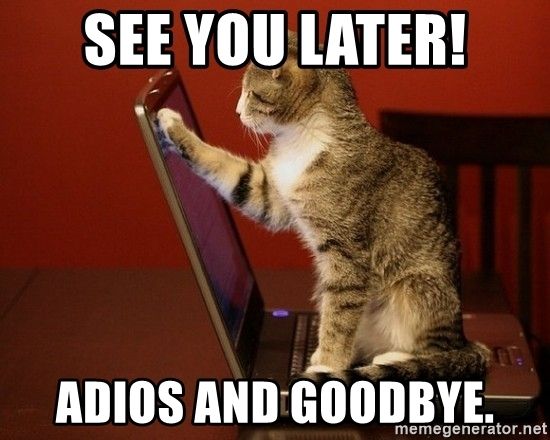 (You didn't really think I could do this without a cat meme, did you?)